The last three items on Tony’s Top 5 of Praha are much shorter than the first two!

Number Three: Communist History
We both found the Communist history of the Czech Republic fascinating. Czechoslovakia only became a republic in 1918 with the destruction of the Habsburg Empire during World War I. Then they were taken over by the Germans, and almost immediately after WWII, as a result of the post-war famines and joblessness, they voted in the Communist Party and were taken over by the Russians. We spent one morning at The Communism Museum, located over a McDonalds and next to a casino – oh the irony, Stalin!

Number Four: Astronomical Clock
Prague is known for its Astronomical Clock, a major feat of ingenuity when it was new in the 1400s. This clock tells the local time in Prague, but it also addresses the phases of the moon and the zodiac. We had trouble reading it, but enjoyed the little show that happened every hour. Just before the top of the hour the little skeleton figure pulls a string to ring a bell. Two windows above the clock open and the twelve apostles parade by, blessing the city of Prague. Then the rooster crows and the clock chimes the hour. It’s a simple little show, and many say it’s totally over-rated, but when you think about it being made in medieval times, I find it pretty amazing! 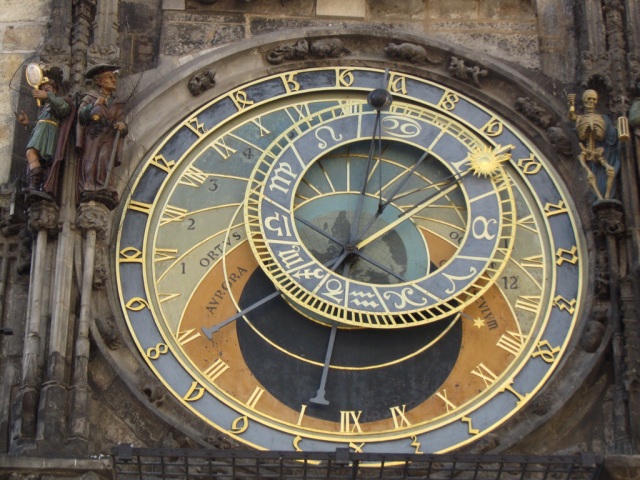 Tony’s favorite aspect of the clock though was the story of its designer. Apparently the leaders of Prague were so impressed with this new clock of theirs that they wanted to ensure no other city would have anything like it. To do so they blinded the builder! He was, understandably, enraged and threw himself into the workings of the clock, damaging it significantly and killing himself in the process. No one else had the know-how to fix the clock, so it sat unworking for 100 years until someone came along who could figure it out! It’s a gruesome tale, but I think that’s why Tony likes it!

Number Five: Just walking around
Despite all the turning and curving streets, Prague was incredibly easy to get around. The town center is so compact; we didn’t take any public transportation until it was time to go to the train station! And walking around was so beautiful!

The square from the other side:

A little street in the Jewish Quarter:

And one more pretty street in the area, modeled after Paris: 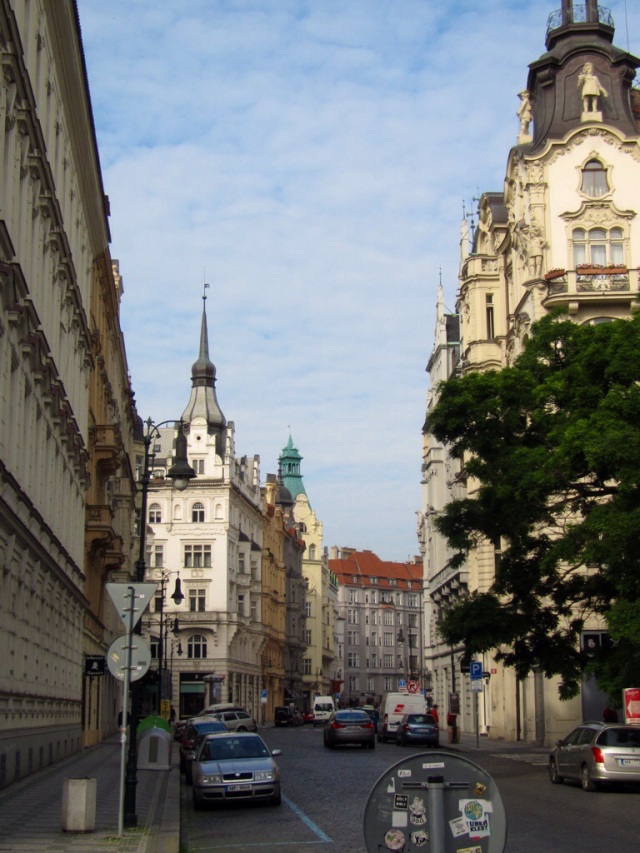 Don’t worry, we sampled some of the local food and drink as well. Tony enjoyed his roast boar, but was less impressed with the potato dumplings and goulash. I had an excellent roast beef in traditional cream sauce with bread dumplings – yum! Czech fare is heavy as it was meant to feed hard working farm hands, so we couldn’t handle it at every meal, but we were glad to discover a good place near the castle.

Speaking of the castle, let’s just take one more look at that baby! This one’s been stylized a bit.

Now on to Vienna…

This entry was posted in Vacation and tagged Europe. Bookmark the permalink.