Shortly after bringing our sweet puppy, Charlie, home in October I disguised his massive dog crate in this post here. It looked great, if I do say so myself. So many people came into the house and asked where we kept him!

Then I woke up in the middle of the night one night completely terrified that the heavy table top was going to crush him while we were sleeping or away at work. It was ridiculous, really, but I was so upset when I woke up that I had to get out of bed to make sure the little guy was still alive! I knew that one of my winter break projects would have to be constructing a sturdier base for the crate cover.

I found plans for a dog crate on Ana White’s website. If you’re not familiar with it, her site is a treasure trove of DIY woodworking projects! Tony looked over the plans and enlarged the dimensions so we could still use the plastic liner from the wire crate, and we’d just put my tabletop right over it.

The plans called mostly for 1x2s and 1x3s, so I spent one afternoon cutting the wood according to the dimensions Tony put together.

Then I sanded each piece. 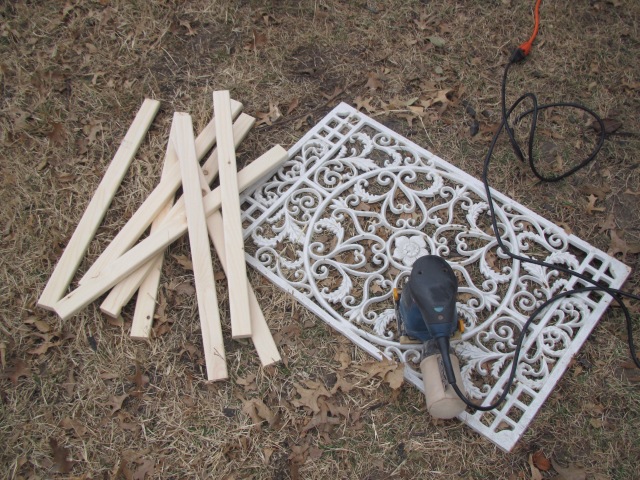 The plans called for the top third to be somewhat open with spaced out slats, sort of like a crib. I knew it would be pretty tough to paint in between the slats, so I painted just those pieces beforehand – 2 coats on all four sides. 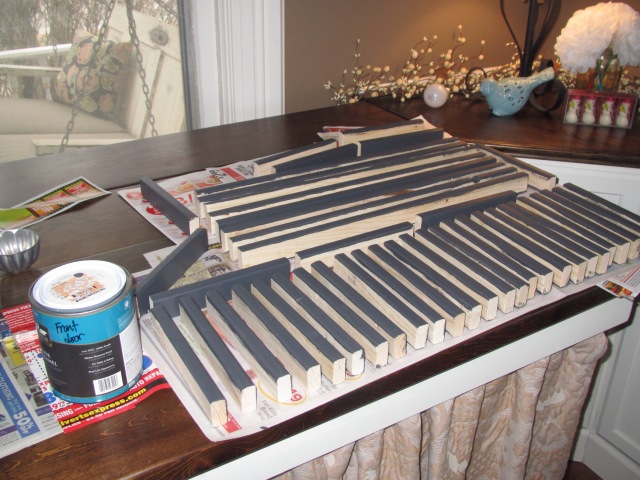 The next day Tony offered to help me drill the holes and construct the crate. We both got to use a Kreg-Jig for the first time to drill the pocket holes. That was pretty cool! 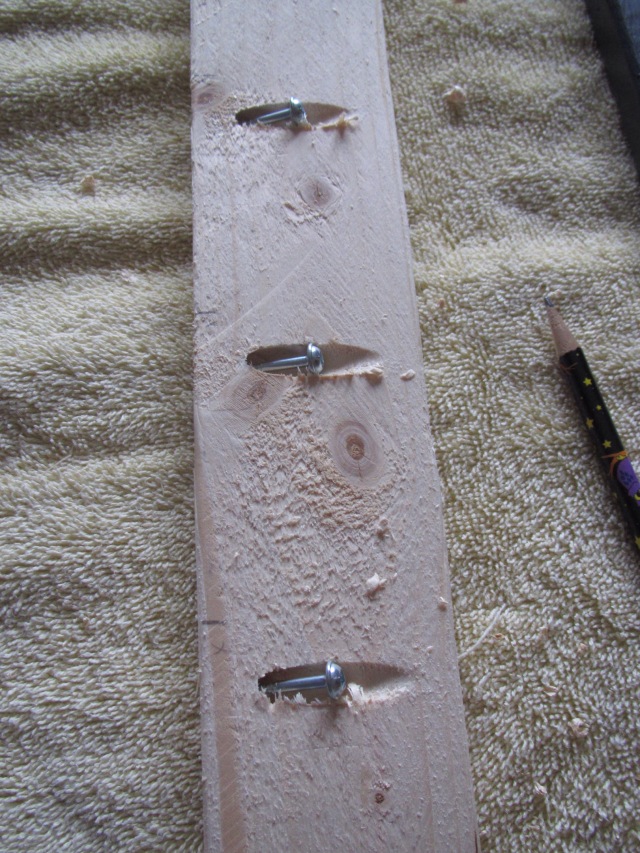 Thanks, Nate, for letting us borrow your tool! (And yes, I do know how that sounds! Anyway…) With all the holes drilled we could begin constructing the rails. 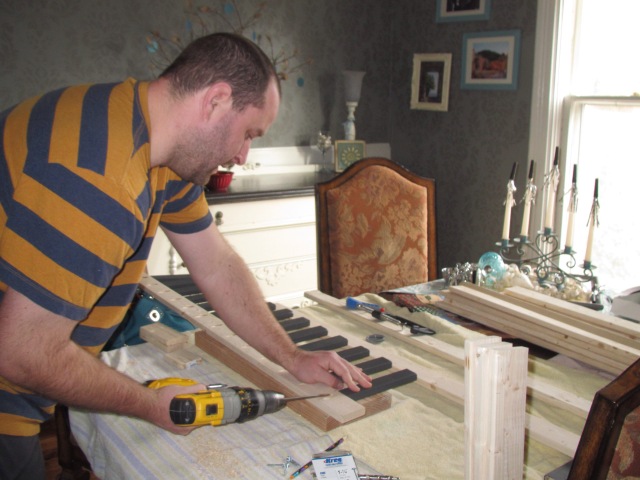 The rails were attached to the frame pieces and secured with plywood sheets cut to size. 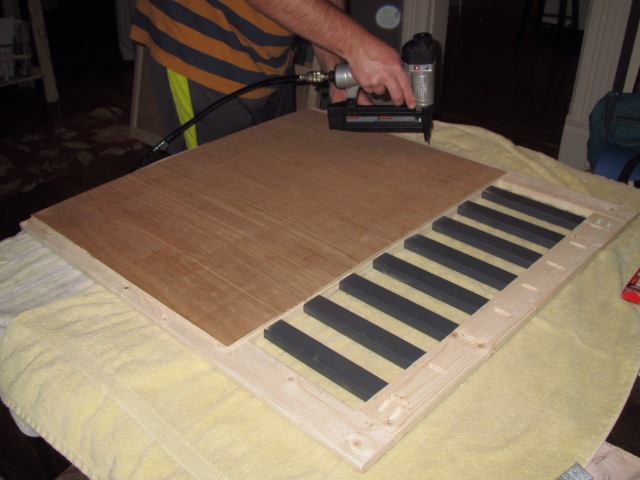 By the end of that day things looked pretty good! This was our mock-up to make sure everything would fit together.

The next day I finished painting and hand distressing each piece.

Finally, we put it together! I snapped this quick photo of Charlie inside, intending to take more pictures the next day after our first day back at work. 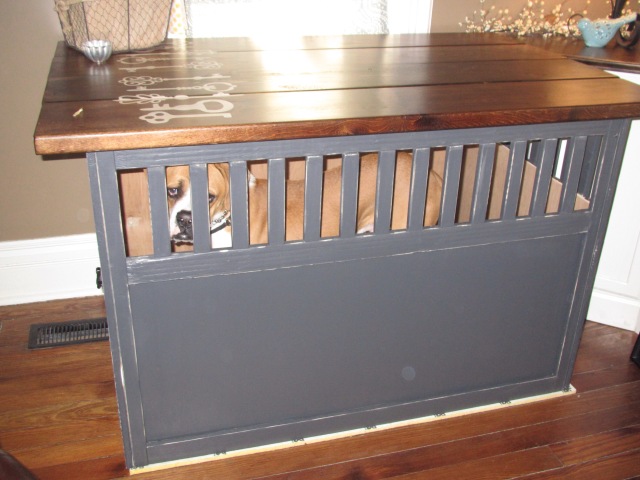 That first day back was an inservice day, and Title teachers typically meet at a school just a few blocks away from home. A friend and I stopped in to see Charlie, since he wasn’t used to being back on the school schedule, and take him outside. She snapped a cell phone photo of the sight when we walked in. 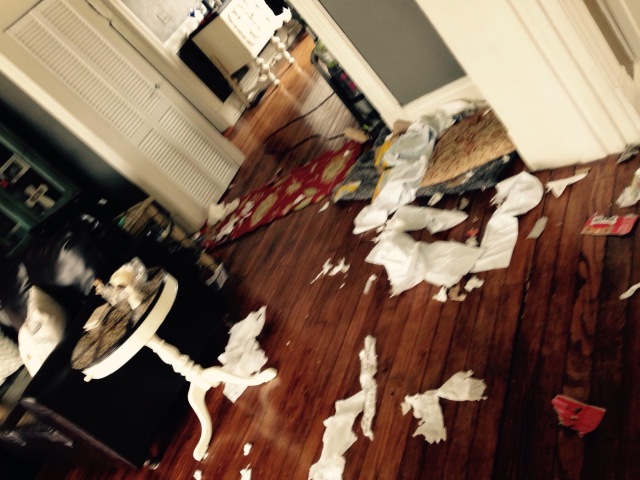 I was in such shock that I didn’t think to snap a photo of the new kennel door hanging from one hinge, the wood with the latch having been completely chewed through, and my puppy laying against the new crate with all 4 legs in the air, a completely satiated, and maybe a little sick, look on his face! Missie was amazing, picking up the destroyed rolls of paper towels, the dryer sheets and trash bags, and throwing away the numerous cardboard boxes he’d shredded in our absense. I went around upstairs, picking up and disinfecting the messes made up there, then I set up his old crate as Missie gently informed me he’d probably get sick that afternoon. And finally we had to get back to work.

The next few days were a little scary as we worked to determine just how much Charlie ate as he was ripping things apart. Thankfully it wasn’t nearly as much as it could have been! Once we knew he was okay it was time to turn our attention back to the crate.

I was so disheartened that my project was an epic fail. I could hardly look at the thing, sitting with the door in ruins, as I walked through the library. Then Tony stepped in and promised to fix it – bless him! Charlie spent the rest of the week in the wire crate in the middle of the library, completely confused every time we told him to go to his kennel, since the wooden one was still in the normal kennel spot. The next weekend Tony took the wooden crate apart and enlarged it so the wire crate would fit inside the wooden one.

I’m happy to report, it’s been over a month and we haven’t had a problem since!

He kinda looks like he hates it in that photo, but I really don’t think he does!

This entry was posted in Furniture, Library and tagged Crate. Bookmark the permalink.