History of a Home II

So… I’ve had these shadow boxes for ages now, just waiting  to display all the great photos and history I was going to find about our house. Unfortunately, that hasn’t panned out quite like I’d hoped. Apparently the city and county don’t keep impeccable records as implied on TV. However, I have finally gathered enough memorbilia that I could fill the two shadow boxes.

This first one holds some of the wires that were saved by the electrician as well as examples of the knobs and tubes (bottom left). The wheels and medal pieces were rescued by the window installers. There’s a pulley and some sort of brackets… I’m not sure about them! The photos came from the Johnson County Museum, and they look old, but they’re dated as being taken in 1995. The other interesting thing about those photos is the 1874 construction date listed in the entry. We’d been told the house was build in 1890, a pretty major discrepency in age.  I know the original property owner received the land in exchange for his Civil War service, so an earlier construction date fits, but I haven’t found any other evidence that supports it yet… still a mystery! 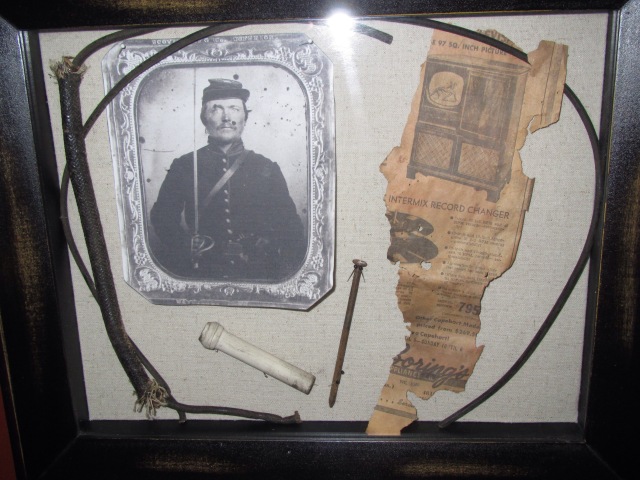 This shadow box has more wires and tubing, as well as a 6 inch nail that Tony took out when removing some baseboard. That’s right – a 6-inch nail into trim! The photo is of the home’s original owner, Charles Eckengren. The newspaper was found when Tony took out the old tub. It advertises a record changer! 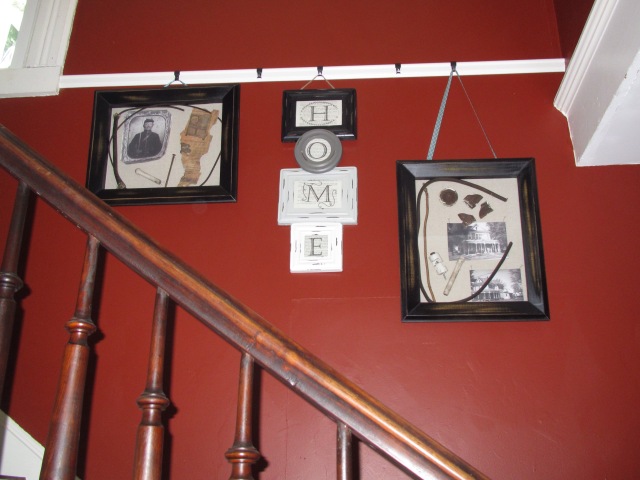 Both boxes have found their new home on the front hall staircase.

I’m hoping our involvement in the Historical Homes Tour in Decemeber will help me learn even more about the history of our old house!

This entry was posted in Hall and tagged History. Bookmark the permalink.