I may have mentioned before that I wanted new countertops in our kitchen. It really wasn’t a necessity. Our existing countertops did a nice job of holding things. I hated them, so I didn’t mind using the crap out of them. And to be completely honest, I secretly kind of like linoleum. It’s not cool or chic, but it’s super durable, and that’s really the most important thing when it comes to a countertop, right? Our linoleum had two major issues though. First, the wall in the kitchen is terribly uneven, to the point that whoever installed our existing cabinets and countertop had to install a tapered 2×4 just to get the cabinets to sit flush with the side walls, and that was pretty ugly. 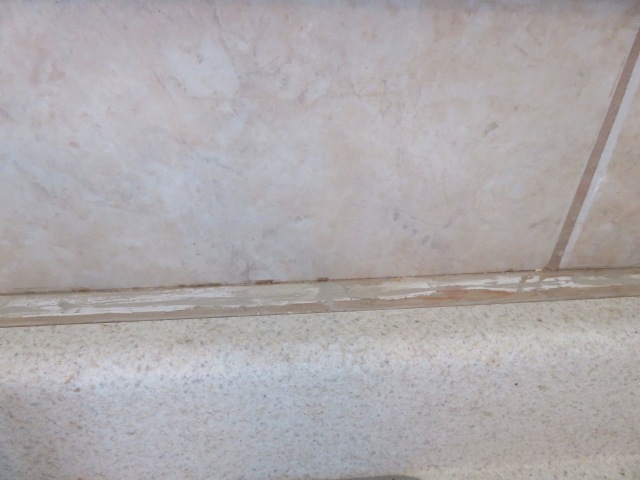 This is the thickest part of the 2×4, right under the windows and over the sink, and it’s probably an inch thick or more. (Side note: we think these windows were installed where there was once a back door. When you look at the siding from the outside it looks like it’s been repaired (rather poorly, obviously, since we can see it) to cover an old doorway. We think that might also explain why the wall is so bowed in this particular spot, as the wood piece tapers down to about a 1/4 inch thick underneath the open shelving and remains relatively consistent the rest of the way down the wall.)

The other countertop issue was this giant seam. I always felt like food particles were going to fall in the crack – gross!

In addition to function, I also appreciate pretty, so a few months ago I went out to price new countertops in a linoleum (because it’s cheaper and it’s more durable than the wood countertops I really wanted) designed to look like Carrara marble (because it’s pretty). I nearly had the order placed at The Depot when the kitchen designer lady mentioned the countertop would come in two pieces, and where would I like the seam? To which I said, “No thank you.” The seam was the worst part of the existing countertops, and a big part of why I wanted them replaced at all, so I left.

At that point I was prepared to let the project go… for awhile… at least until after Baby arrived. I know, letting things go isn’t really my style, but this time I was going to, I swear! I mean, this is my ninth month of pregnancy after all.

Speaking of, some maternity pics:

But then I asked my friend about her DIY countertop experience. She painted her countertops a little over a year ago, and I wondered how they’d held up. She gave me all the details, and said, “Oh Lindy, if you’re going to do it, you’d better do it before the baby comes, because you’re not going to want to wash dishes and bottles in the bathroom sink with a brand new baby.” Well, crap, I thought. I guess I’d better get on this! And since I was going to be doing the countertop, it just made sense to do the backsplash and upgrade the kitchen sink and faucet at the same time! Poor Tony just shook his head and said, “What do I have to do?” Thus began this latest kitchen remodel. You’ve seen the backsplash (Phase 1), and this post is about the countertops (Phase 2)!

Last weekend I prepped the counters by filling the seam and the joint where the 2×4 meets the back rise of the countertop with woodfiller. 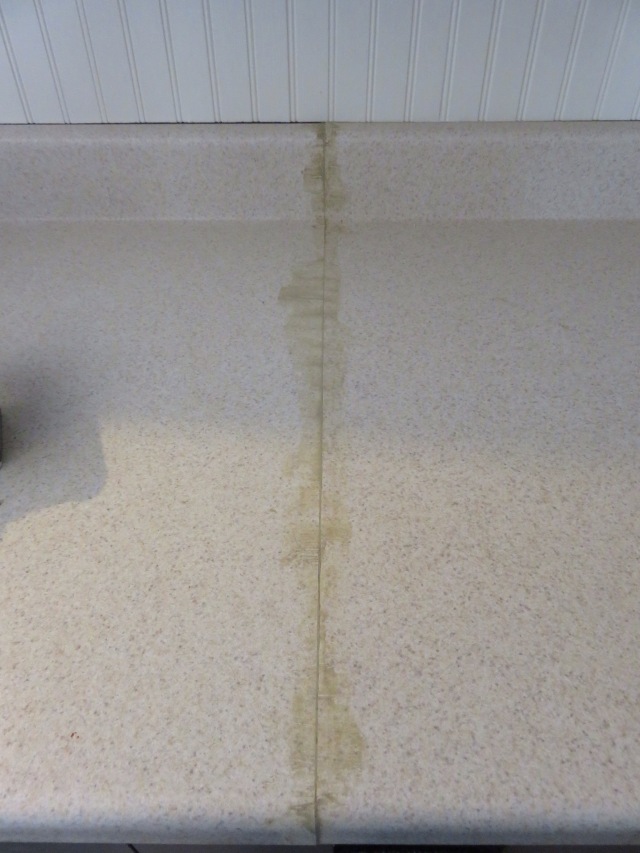 Then I sanded it as smooth as I could. 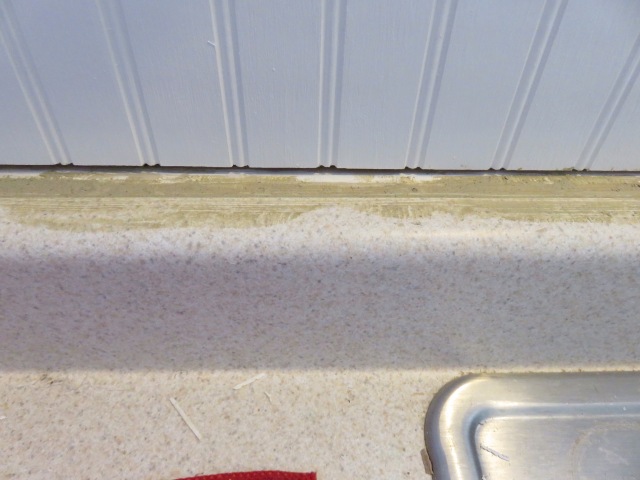 Based on my friend’s recommendation, I had ordered a Giani countertop refinishing kit from Amazon. The kit is designed to create a granite look, and I was looking more for marble, but they had a little YouTube video that covered that.

Step 1, after sink removal, was a thorough cleaning and a coat of black primer. 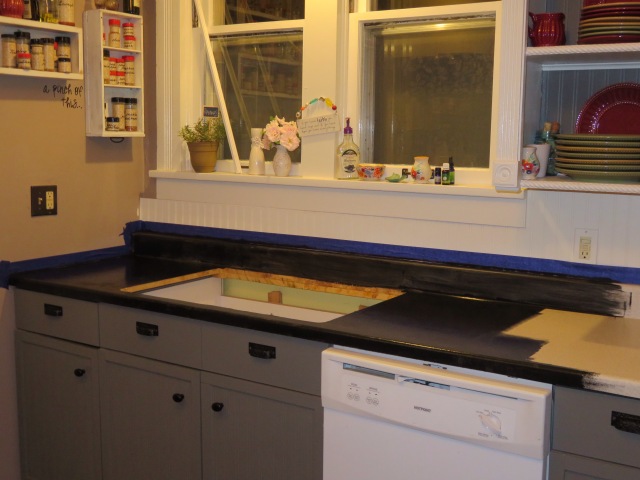 I kind of liked the look of the black, but I pressed onward with the original plan after the primer dried overnight. Since I was going for Carrera marble, I started Saturday morning by rolling on a layer of white paint, then sponging on”white flows” in random patterns.

It was a little zebra stripey, but I just kept going! The next step was to add the veining. There were a lot of different techniques mentioned online about how to do this. Many people used a feather, but I just couldn’t figure that out, so I played around with a couple options. The combination that worked best for me was to mix a little of the black primer and the white paint to make a dark gray. Then I used a fine tipped artist brush to paint lines through the gray spots on the counter. The lines were very uneven, on purpose, then I sprayed the lines with water and they kind of took on a life of their own.  The difficult part was that rise at the back. I wanted the marbling effect that the water created, but the first time I tried it, the water (and therefore the black paint) just dripped straight down.  It looked awful! So I would paint the veins, spray a light mist on them, then use my sponge to catch the extra water as it fell down. It worked pretty well.

As the veining dried I sponged over the whole counter with more white to mute the veins a bit and lighten the whole thing up. The scariest part was the next step. I mixed water into the white paint and was supposed to pour it over the whole countertop! I thought this sounded like a terrible idea, but that’s what the directions said to do. So, when Tony went to bed, I snuck back downstairs (just because I knew I wouldn’t sleep for thinking about this next step) and went for it. I used the foam brush to spread the watery paint around, but I was concerned about brush marks, so I also gave it a couple sprays with the squirt bottle as well. Then I used the foam brush to keep the excess paint from dripping off the front of the counter or from pooling where the counter met the rise. When I was satisfied that there wouldn’t be any more drips, I went to bed and hoped it would be okay in the morning. You can see a bit in the photo below how wet it was.

This is what it looked like in the morning:

That day I applied 3 coats of the clear that came in the kit, and we began the wait. The directions said we could use the counter after 24 hours and put appliances back after three days, but we’re waiting the full two weeeks for the paint to completely cure before we put anything back to sit on the counter.

This is probably the first house project I haven’t been totally in love with. It’s good. I like it. I just don’t love it.

Pros: 1. The 2×4 at the back of the backsplash is totally covered; it looks like one consistent piece now. 2. The seam is mostly covered as well. I don’t feel like crumbs or juice are going to get in there anymore. 3. It was a relatively quick project, completed in just one weekend, and we were without a kitchen sink for less than a week. 4. The price is pretty fantastic –  a complete makeover for under $100.

Cons: 1. It’s not quite as white as I was wanting, but more gray. If I could do it over, I’d roll on 2-3 coats of white before sponging in the “zebra stripes.” 2. I sponged some of the Pearl Mica color over the top, and that was a mistake. I couldn’t really see the pearl color when I was sponging it on in the morning, but by the afternoon it was catching the light coming through the kitchen windows, and it makes the counter look dirty from certain angles. 3. Despite my best efforts, some of the watered-down white paint ended up pooling at the base of the rise. I tried sanding it out the next morning, but it didn’t work. The thicker band of white is probably only noticeable to me, but it’s still a con. 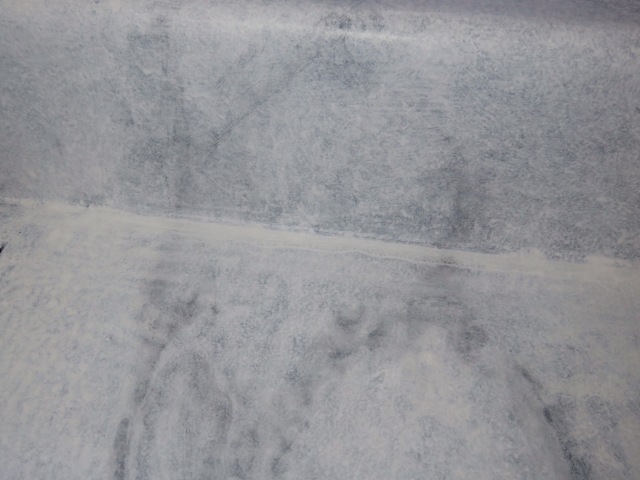 At this point, I’m still glad I tackled this project, despite not loving the outcome. I love the idea of painting anything and everything, and the new sink and faucet are fantastic. Our two week waiting period will be up this weekend, and then we’ll see how this stuff holds up over time!

This entry was posted in Decor, Kitchen and tagged Countertop, Kitchen, Marble, Paint. Bookmark the permalink.