With the beautiful Spring weather we’ve had recently, Tony and I have spent a lot of time outside. A couple Saturdays ago was Mulch Day. Tony went to get a truckload of mulch while I got EO set up in the Pack’n’Play out front.

After all the new plants were planted and the mulch was spread, I mentioned to Tony that it might be time to sell the bricks that have been sitting out back for the last few years. 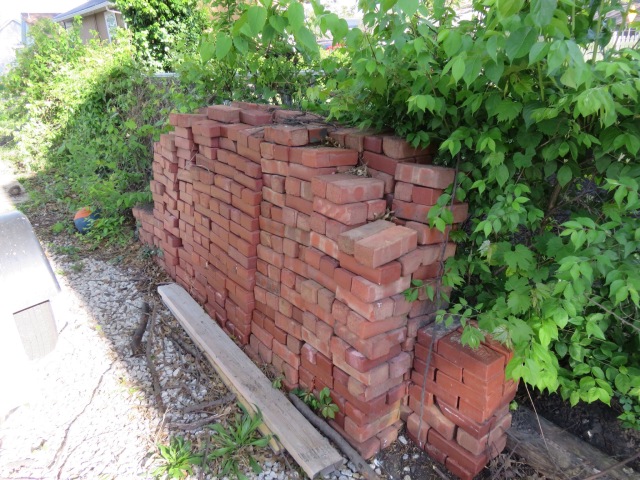 Tony found these bricks on CraigList when someone was digging up their brick patio, but originally they paved a road in some small town nearby. He had this awesome vision of a brick patio off the back porch. Then he got busy with the bathrooms and the library and school and everything else, so they’ve been sitting there ever since.

I swear there was no ulterior motive when I suggested it was time to get rid of the bricks, but next thing I knew, this was happening:

It took him a couple weekends to dig out the hole, but now he’s ready for the gravel!

At least, he will be when this swimming pool dries up! I guess this weekend’s rain is a good thing- now Tony can focus his energy on finals while the hole dries out.

PS: If anyone needs fill dirt, we have a ton of it! Come over and take whatever you need!